Caol Ila (pronounced /kʌl ˈiːlə/ in English) is derived from Gaelic Caol Ìle (pronounced [kʰɯlˠ̪ˈiːlə]) for "Sound of Islay" (lit. "Islay Strait") in reference to the distillery's location overlooking the strait between Islay and Jura. It was founded in 1846 by Hector Henderson. The distillery did not fare well, and changed hands in 1854 when Norman Buchanan, owner of the Isle of Jura Distillery, took over.
In 1863 the business was acquired by Bulloch Lade & Co, of Glasgow, traders in whisky stocks. By the 1880s over 147,000 gallons of whisky were produced there each year.

In 1920 Bulloch Lade went into voluntary liquidation, and a consortium of businessmen formed the Caol Ila Distillery Company Ltd. In 1927 the Distillers Company Limited acquired a controlling interest in Caol Ila, and in 1930 Scottish Malt Distillers Ltd obtained ownership of all the shares. The company eventually became part of Diageo.

The distillery closed during World War II, from 1942 to 1945, because of wartime restrictions on the supply of barley to distillers. From then, production continued until 1972, when the entire structure of the distillery was demolished. A larger distillery was built in the same original architectural style, and production resumed in 1974.

Caol Ila is one of the lighter Islay whiskies, pale in colour, with peaty, floral and peppery notes. In addition to being sold as a single malt, it is used heavily in blends such as Johnnie Walker and Black Bottle.

Different expressions of Caol Ila have generally rated highly at spirit ratings competitions. The 12-year, for example, received two double gold, three gold, and one silver medal from the San Francisco World Spirits Competition between 2005 and 2010. It also received an above-average score of 90-95 from Wine Enthusiast in 2005. The 18- and 25-year expressions, though not as frequently rated by outside agencies, have also tended to score well. 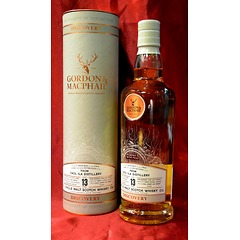 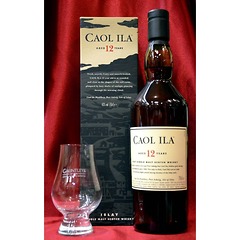 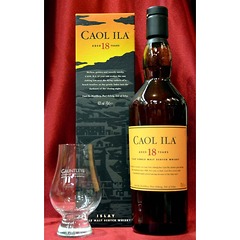