shopping_cart
The shop is now open 10am to 4pm Monday to Thursday, and 10am to 5pm Friday and Saturday.

The distillery was founded in 1830 by Hugh and Kenneth MacAskill, and built in 1831 at Carbost after a number of false starts on other sites when they acquired the lease of Talisker House from the MacLeod of MacLeod. The distillery was rebuilt 1880-87 and extended in 1900.When a new lease for the distillery was negotiated with the chief of Clan MacLeod in 1892 the annual payment was to be £23.12s and a ten-gallon cask of best-quality Talisker. It was rebuilt in 1960 after a stillhouse fire completely destroyed the distillery. The distillery operates five stills, two wash stills and three spirit stills. All the stills use worm tubs (condensing coils) rather than a modern condenser, which are believed to give the whisky a "fuller" flavour (itself an indication of higher sugar content). During this early period, the whisky was produced using a triple distilling method, but changed to the more conventional double distilling in 1928. Talisker was acquired by Distillers Company Limited in 1925 and is now part of Diageo. The distillery was nearly destroyed by fire in 1960, however five exact replicas of the original stills were constructed to preserve the original Talisker flavour. In 1972 the stills were converted to steam heating and the maltings floor was demolished. Talisker’s water comes from springs directly above the distillery via a network of pipes and wells.

The malted barley used in production comes from Muir of Ord. Talisker has an unusual feature - swan neck lye pipes. A loop exists in the pipes taking the vapour from the stills to the worm tubs so some of the alcohol condenses before it even reaches the cooler. It then runs back in to the stills and is distilled again. Talisker now has an annual output of three and a half million litres of spirit.

Talisker was the favourite whisky of writers Robert Louis Stevenson and Henry Vollam Morton. In his poem, The Scotsman's Return From Abroad, Stevenson mentioned "The king o' drinks, as I conceive it, Talisker, Isla, or Glenlivet." 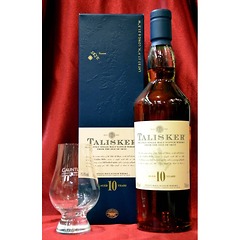 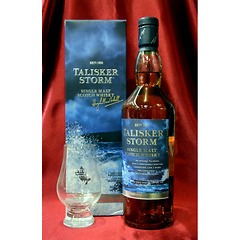 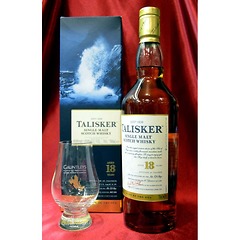 Talisker
18 year old 45.8%
£98.12
Be the first to hear about new bottlings, limited editions, offers and our whisky tasting events
Join thousands of other whisky lovers & subscribe to get all the news from Gauntleys, our latest offerings & whisky events