Fred van Zuidam began distilling Genever, the preeminent Dutch national spirit back in the 1950’s when he worked as distiller for deKuyper, however in 1974, he decided to go it alone, with intension of producing the best Genever in Holland. Since then he has passed on the distillery to his son Patrick van Zuidam, who after some earlier experimentation with different types of grains in order to make a Genever which ages well, has now branched out into distilling not just Genever but malt whisky and even rye!

Genever is not only the national spirit of Holland but also distilled in Belgium and the Nord département of Northern France. It was believed to have been invented by a Dutch chemist called Sylvius be Bouve and was sold as a medicinal beverage in the 16th century. Like gin the earliest spirits were pretty rough due to the crude distilling techniques of the day, and in order to make it vaguely palatable it was flavoured with Juniper. The juniper berry (Jeneverbes in Dutch, which comes in its turn from the French genievre) was chosen for its alleged medicinal effects, hence the name. As distilling techniques became more refind it was bought more for it’s flavour than as a medicinal tincture.

Although known as Dutch Gin (or Jenever, or Genievre) it isn’t exactly London Dry. For a start it begins life as a mash of malted barley, rye and corn, which at Millstone is subjected to temperature controlled fermentation with two strains of yeast for five days. The mash is then triple distilled in Holstein stills, which are copper pot stills with a tall rectifying column containing a number of plates, which are removed during the distillation of whisky.

A percentage of this spirit is then redistilled with botanicals and blended back into the original distillate. Finally some neutral grain spirit is added and the resulting Genever is filled into cask and aged. The result is a subtly flavoured spirit which has a considerable amount of complexity, derived from all the different components.
Order by 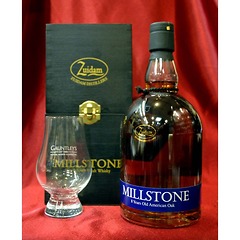 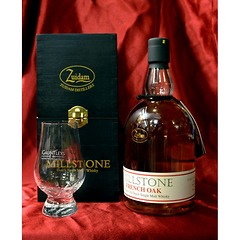